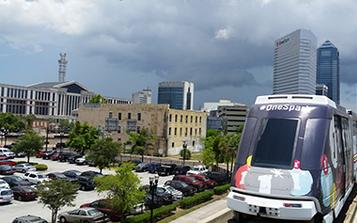 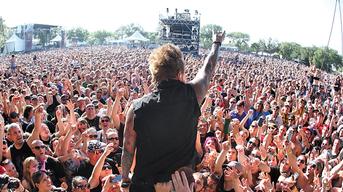 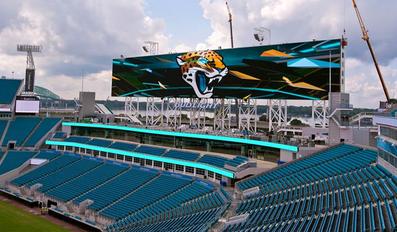 Along the curving, scenic St. Johns River resides Jacksonville, Florida, the largest city (in terms of land area) in the United States. Nicknamed Jax by locals, the city and its lively waterfront offer access to boat cruises, riverfront boardwalks and fishing. Located on opposite shores are the restaurant and bar scenes of Jacksonville Landing and Southbank Riverwalk.
The nearby Jacksonville beaches reign supreme for fishing, swimming, snorkeling and sailing – at least from March to November. Four beach communities are situated 20 minutes from downtown, each with its own unique personality. Atlantic Beach and Neptune Beach are divided by Atlantic Boulevard. Where the boulevard meets the ocean, sits Town Center, popular for its quaint shops, restaurants, pubs and inns. Travelers ready to hit the links should head to Ponte Vedra Beach, where the TPC Sawgrass and its famous 17th island hole await. For waves, take Beach Boulevard until it dead-ends at Jacksonville Beach, which is frequented by locals in search of the perfect surf.
Sports fans quickly find the city offers plenty of options. In the fall, the Jacksonville Jaguars play eight home games the in NFL's highly competitive AFC South. Meanwhile, those visiting in early January can try for tickets to the Gator Bowl Classic.
Several prominent event venues combine to offer a full calendar of fun things to do in Jacksonville, including concerts, Broadway shows and dance performances. Jacksonville Municipal Stadium has 73,000 seats, and Jacksonville Veterans Memorial Arena boasts 16,000 seats. The Times-Union Center for the Performing Arts seats 4,400 and has hosted the Jacksonville Symphony and Vince Gill. The revitalized Ritz Theatre is located in the historic African-American community of La Villa, a neighborhood that, from the 1920s to the 1960s, was known as the “Harlem of the South.” Today, the venue features everything from jazz jams to spoken-word performances.

Nightlife in the Jacksonville is alive and well. Travelers with an ear for music can drop in at the Ragtime Tavern & Taproom at Town Center for live jazz and blues. On weekends, the crowd there is lively but never rowdy. Whisky River is both a restaurant and a live music venue owned and operated by NASCAR great Dale Earnhardt, Jr. With live music six nights a week, Freebird Live highlights the life of Lynyrd Skynyrd’s late lead singer, Ronnie Van Zant, and is run by his widow and daughter.
Distinctive neighborhoods of note include Riverside, an upscale showcase of the finest homes Jacksonville has to offer. Many are listed on the National Register of Historic Places, and walking tours are available. The area is also peppered with shops and restaurants for tourists to explore. The San Marco neighborhood offers several locally owned shops and restaurants, many of which are housed in quaint, 1920s Mediterranean revival buildings. The neighborhood's most noteworthy homes are located on the streets surrounding San Marco Square.
For must-see kids' activities in Jacksonville, be sure to schedule visits to the Museum of Science and History, Adventure Landing amusement park, Jacksonville Maritime Museum and the Jacksonville Zoo and Gardens.